Not of This Earth is a 1988 science fiction remake of a 1957 Roger Corman classic. Starring Traci Lords, Roger Lodge, Kelli Maroney, Becky LeBeau and Monique Gabrielle. The film was directed by the legendary Jim Wynorski who also directed such classics as Piranahaconda, Hard to Die and Chopping Mall to name a few.

Not of This Earth is a sci-fi/horror/comedy thrill ride with shades of the classic drive-in movies of the ’50s and ’60s. The movie was made on the outcome of a bet between Wynorski and Corman. Wynorski claimed he could remake the original film at the same budget and timing as Corman did in 1957.

Wynorski cast Traci Lords after he saw her in a newspaper, but it was difficult to find her since she didn’t have an agent and was trying to change her reputation and roles.

Not of This Earth Plot Summary

A nurse named Nadine Story (played by Traci Lords) works in the office of Dr. Rochelle (played by Ace Mask). She runs into a patient, Johnson, (played by Arthur Roberts), always dressed in black with sunglasses, who demands a blood transfusion. The doctor tests his blood, and finds that Johnson does not produce normal blood. After this, Johnson hires the nurse, Nadine, to come to his home and give him transfusions on a regular basis. Her boyfriend Harry (played by Roger Lodge) helps her find out that he is actually an alien, coming from a strange faraway planet called Davanna, looking for a constant supply of blood that Davannians use to live. 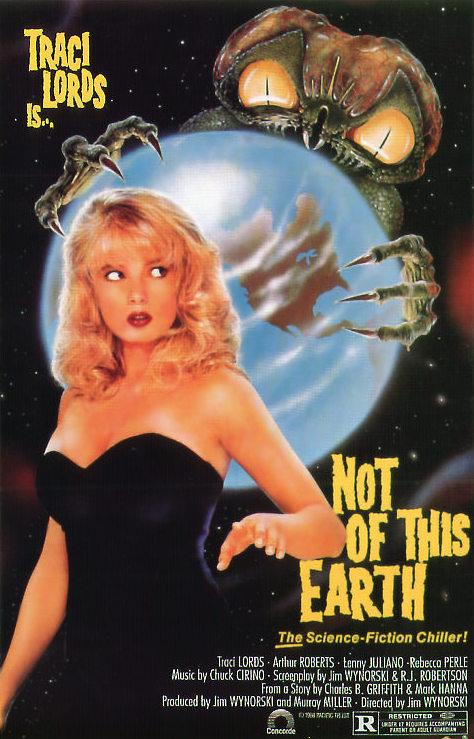