The 1983 film The Throne of Fire (also known as Il trono di fuoco) is an Italian sword-and-sorcery film that was filmed in Rome. The film is considered a standard ripoff of Conan the Barbarian, but has since become a popular cult classic. The film stars Sabrina Siani, Pietro Torrisi, Harrison Muller, Beni Cardoso, and Pietro Ceccarelli.

A demon and a witch have a son named Morak (played by Harrison Muller) and he intends to rule the entire realm, having a massive ego trip believing he can do anything. However, in order to gain the right to sit on the Throne of Fire, which was originally created by Odin, you must both be a rightful heir and sit on it during a solar eclipse. He captures Princess Valkari (played by Sabrina Siani) in order to marry her, making him a rightful heir. Before he can sit upon the throne, however, a heroic barbarian named Seigfried (played by Pietro Torrisi, credited as Peter McCoy) saves the princess from the tragedy and battles Morak. 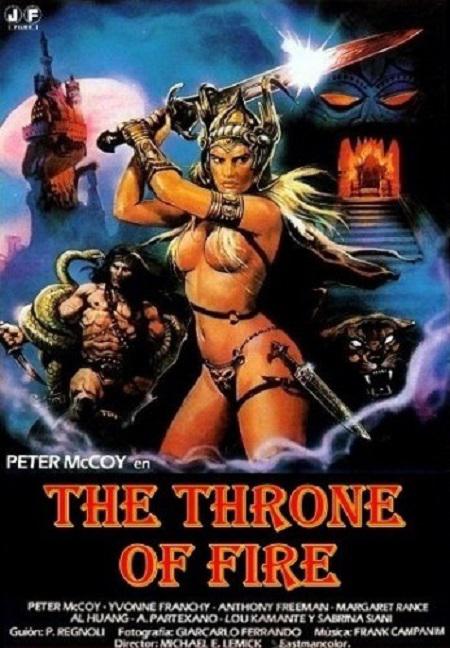