The 1991 film Neon City is a post-apocalyptic science fiction movie, directed by Monte Markham. This b-movie, which has since become a cult classic, stars a variety of actors including Michael Ironside, the singer Vanity, Valerie Wildman, and Juliet Landau.

The film begins far in the future, in the 2050s. The world has been destroyed and mutants rule the wastelands.

Harry Stark (played by Michael Ironside) is a bounty hunter who used to be a police officer. He saves a woman named Reno (played by the singer Vanity) but she attempts to kill him, so he brings her in for bounty. He learns that she has to be taken to Neon City for the bounty. The local sheriff destroys Harry’s truck and puts both Harry and Reno in the transport to Neon City.

On the transport are a group of misfits including a serial killer, a clown, Harry’s ex-wife (played by Valerie Wildman), an old man, and Twink (played by Juliet Landau) who is a rich girl.

They arrive at an outpost where mutants have killed most of the population. The sole survivor is murdered by the serial killer. On the road, they stop at a mutant restaurant but are attacked when they leave.

Reno wants Stark to leave the group with her, but he does not want to abandon the others. They find out that the old man is Dr. Xander, who is the scientist responsible for most of the world’s destruction.

They run out of ammo when defending against mutants, and Xander builds a laser gun to save them. Their transport is destroyed and they walk the rest of the way to Neon City. 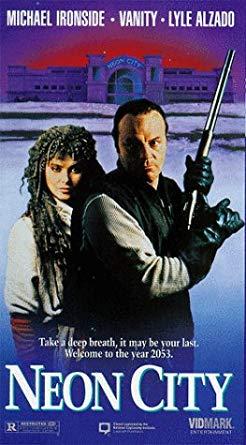