The 1993 science fiction/horror film Carnosaur is a Roger Corman-produced B-movie that has since become a cult classic. The movie stars Clint Howard, Jennifer Runyon, and Diane Ladd. The movie, which features a scientists genetically engineering dinosaurs to replace humans, was released four weeks before Jurassic Park and ended up grossing $1.8 million.

The movie begins with Dr. Tiptree (played by Dianne Ladd), who has become a hermit and is researching genetics for the Eunice Corporation.

DARPA is suspicious of the research she is doing, but can’t stop her from her research. Suddenly, one of her chickens hatches a sort of dinosaur which wreaks havoc and escape.

Her laboratory is located in a remote town in Nevada, and suddenly the residents start suffering from a strange illness.

At a local quarry, a watchman named Doc Smith (played by Raphael Sbarge) keeps an eye on the equipment to stop Greenpeace activists from vandalizing it. He calls the police when he finds a trespasser (played by Jennifer Runyon), but the police are busy investigating the mysterious killings that are popping up.

A group of environmentalists chain themselves to the quarry equipment to protest mining, but a dinosaur shows up and kills them all and they cannot escape in time.

The watchman saves one of the activists, the original trespasser, but they take shelter in his trailer.

The watchman goes looking for the source of these attacks, and ends up in Tiptree’s lab and forces her to tell him what she has done. It turns out she has infected chicken eggs to spread a virus to the town’s humans, and implant dinosaur embryos into females.

The government puts the entire city under quarantine and starts killing every human they see on sight.

The local sheriff goes to a kennel, after getting a call about a problem. He finds a dinosaur, and shoots it in defense. Both him and the dinosaur are fatally wounded. Meanwhile, the government is seizing control of the situation and sees an opportunity to repopulate the world while having control over birth rate.

The watchman escapes the lab with a cure to Tiptree’s virus, but is pursued by a Tyrannosaurus Rex. The doctor, Tiptree, becomes infected with the virus and, since the watchman has taken the cure, ends up birthing a dinosaur and dies.

The watchman goes back to the trailer at the quarry and gives the trespassing activist an injection of the serum. He fights the pursuing T-Rex with the quarry equipment, and ultimately kills it. However, at the end of the movie the watchman and the activist are both killed by government troops. 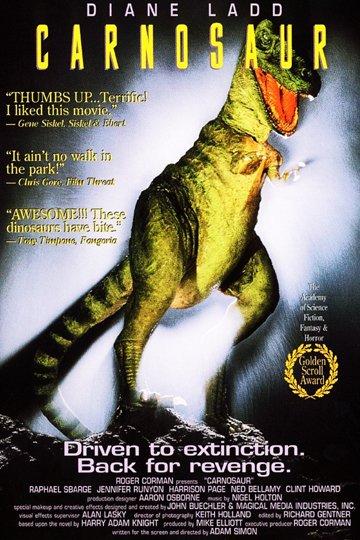