The 1985 science fiction and comedy film Star Worms II: Attack of the Pleasure Pods is a Troma cult classic B-movie starring Taylor Gilbert, David O’Hara, Orly Oh and Jeff Munson. There was no Star Worms I. The film was also known as Star Prison and was directed by Lin Sten.

A man named Jessup (played by David O’Hara) is hiding his true identity, while captured on a barren planet named Star Prison. Spending his days mining in perilous rivers for Fire Gems, which are a form of psychedelic drug minerals, he gathers together some allies and fights his way through other prisoners and ultimately battles Star Worms, a Dune-style monster.

The Lords of the Evil Empire use this mineral for their own pleasure, in a manner greatly reminiscent of the spices in the Dune franchise. 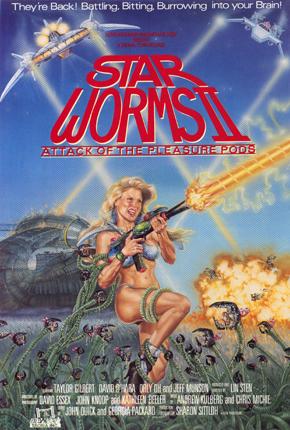