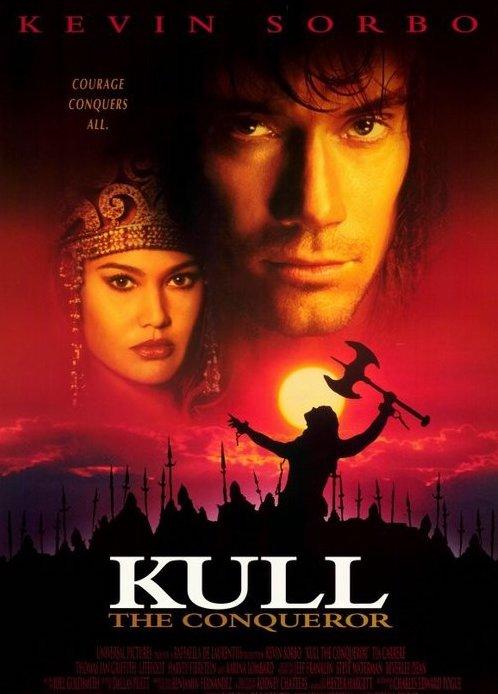 The 1997 film Kull The Conqueror is a sword-and-sorcery fantasy film. This b-movie was originally intended to be a third Conan film, it was changed to a new character after both Schwarzenegger refused to reprise his role, and Kevin Sorbo did not want to play someone else’s character.

After General Taligaro (played by Thomas Ian Griffith) tells Kull (played by Kevin Sorbo) that he can never join the elite force called Dragon Legion, because he is a barbarian and not of noble blood, he decides to fight for the right to join.

The King of Valusia, Borna (played by Sven-Ole Thorsen) goes mad and begins slaughtering his heirs. Kull rides to Valusia and fights King Borna, who succumbs and names him as his successor as he dies. Kull, now king, holds the right to the Dragon Region which greatly disappoints the general, Taligaro.

Kull recognizes one of the Borna harem members as Zareta, a fortuneteller who once foretold his future nobility (played by Karina Lombard). Kull attempts to free all the slaves, but finds out that the stone tablets containing the law of Valusia don’t permit this. General Taligaro try to assassinate Kull while he is being crowned King, but they fail.

A necromancer, Enaros, offers to help Taligaro kill Krull by bringing back Akivasha, a sorceress queen, from the dead (played by Tia Carrere).

Kull escapes, frees Zareta, and head out of the kingdom, looking for the Breath of Valka which is a weapon that can prevent Akivasha from turning into a demon, her final form. However, they are attacked and Zareta is captured and Kull is almost killed. He goes back to Valusia and, after getting the Breath of Valka from Zareta, he kisses the demonis Akivasha and kills her forever, then kills Taligaro.

He then names Zareta his queen and destroys the tablets, making slavery illegal.

Karina Lombard in Kull The Conqueror (1997)