This is the sort of B-movie that ticks all the right boxes, a film to satisfy even the most promiscuous movie fan. You might be thinking “this sounds great, but is it crass?” Absolutely. “Moronic?” Without question. “Is it sufficiently low-budget?” Hey! You’ll have to cross your eyes to find it believable.

“Okay, but what about senseless gore and pointless nudity?” Hey, I wouldn’t bring it up if there weren’t.

Throw in a gun wielding psychopath sporting a Ronald Reagan mask, two weak-minded brothers juggling a vegan restaurant by day, ritualistic sacrifices by night and you’ve started to get a taste of Blood Diner.

So sit back, relax. Turn off the lights. Grab the popcorn. Refill your Lexapro. And enjoy the show. 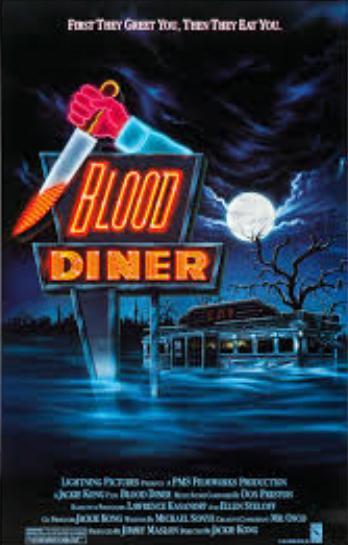