The 1977 action/kung fu film Mighty Peking Man is a remake of King Kong starring Evelyne Kraft. The film was released in the US in 1980, under the name Goliathon.

A group from Hong Kong, lead by Johnny (played by Danny Lee) is exploring the Himalayan mountains. They discover the “Peking Man”, who is a Yeti, who is there with Samantha, a feral blonde woman (played by Evelyne Kraft). She knows how to swing on vines and talk with animals.

She is bitten by a snake, and Johnny must suck out the venom, and they fall in love. They take her and the Yeti back to Hong Kong, where the monster is put on display. Samantha continues to wear her animals skins, and Johnny gets back with his girlfriend with whom he had broken up earlier.

Samantha’s feelings are hurt so she runs off, putting herself in danger, so the Yeti freaks out and kills her harasser. The Yeti continues to rage, climbing a tall tower. In a scene similar to King Kong, helicopters attack the Yeti and kill him. Samantha and Johnny are also injured in the scene, which then ends. 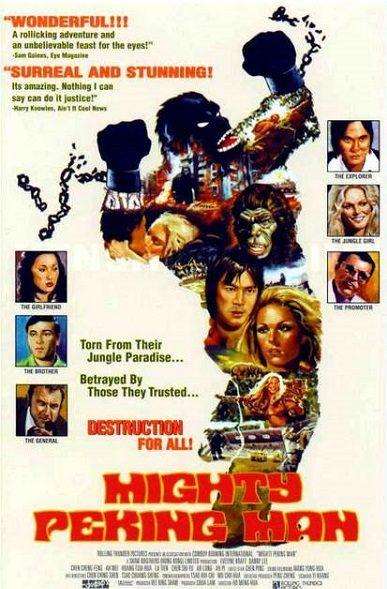