The 1994 comedy sci-fi film Tammy and the T-Rex is a low-budget film written & directed by Stewart Raffill. The movie stars Denise Richards and an early appearance by Paul Walker.

The film was shot in locations that were all just a few minutes from the director’s house, and the movie was conceptualized by a South American theater owner who had an animatronic dinosaur available for two weeks which he wanted to get some use out of.

A cheerleader named Tammy (played by Denise Richards) hangs out with her football player boyfriend Michael (played by Paul Walker) along with her gay friend Byron (played by Theo Forsett). However, an old ex named Billy (played by George Pilgrim) shows up with his group of thugs and starts bullying Michael. They start to fight, but when the police show up they arrest the bully and the trio is left in peace.

Elsewhere, a large dinosaur (a T-Rex) is looming inside a huge warehouse being worked on by two scientists, Dr Wachenstein (played by Terry Kiser) and his assistant Helga (played by Ellen Dubin). The dinosaur turns out to be a robotic creation, and Dr Wachenstein’s intention is to surgically implant a human brain into the dinosaur to give it life.

That night, Michael visits Tammy after hours. However, Billy and his group is out of jail and angry, looking for revenge. They beat up Michael and take him to a zoo, throwing him into a section with wild cats. Lions attack Michael and he passes out.

The evil doctor, Wachenstein, says that Michael is dead, but he secretly removes his living brain and surgically inserts it into the dinosaur’s robotic skull. Michael wakes up, now in the body of the robotic T-Rex, and escapes from the warehouse. He finds his bullies and terrorizes them, and finds Tammy who finally comes to the realization that the dinosaur is actually her boyfriend. She wants to find a better body for his brain to reside, however they must escape Dr Wachenstein who is chasing them. Michael, as the T-Rex, kills Wachenstein but is then destroyed himself by police. Tammy gets Michael’s brain from the T-Rex’s wreckage and takes it home, hooking up the brain to her personal computer in her room. Michael has the ability to see out of the computer through a video camera, and seeing Tammy in her room initiates an electrical overload to the brain circuits. 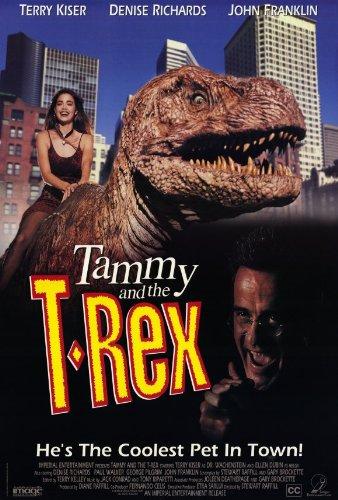