The movie Shark Attack 3: Megalodon (2002) is a sequel to the first Shark Attack movie from 1999. The sharksploitation movie was released direct to video in 2002 and has become a cult icon in the shark movie genre due to the objectively terrible special effects and production value.

Divers working on a cable in the ocean are attacked by a shark, leaving one of them dead. Months afterwards, a lifeguard in California named Ben (played by John Barrowman) pulls up a power cable with a shark tooth attached to it. He posts a picture of the tooth online and is contacted by a researcher named Cat Stone (played by Jenny McShane) who tells him it is from an ancient megalodon.

Ben and his friend Chuck want to take a look at the cable, and then find out the shark has killed two people on a waterslide. Cat Stone goes out on a boat to find the shark, hooks a camera to the shark’s fin, but their boat is smashed up. The shark later kills other people on the beach and Ben finds a leg. Ben’s boss tells him to kill the shark, so he and Cat go out to kill it.

They battle the shark on the boat, using shotguns and harpoons, but the boat is swallowed by the shark and Cat and Ben escape on a helicopter. Ben’s boss does not want to close the beaches, and tells him to kill the shark quickly. His friend Chuck has a tiny submarine, so they go out in it searching for the shark, which has started attacking a yacht. The shark knocks several people overboard, including Ben’s boss, who is promptly eaten. Finally Ben launches a torpedo at the shark which is destroyed. 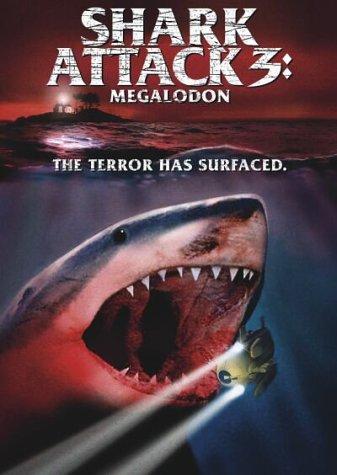