The 1984 film Repo Man is a science fiction and comedy film that has since become a cult classic.

In the Californian desert, a cop who pulls over a ’64 Malibu driven by Dr Parnell (played by Fox Harris) checks the trunk and is instantly destroyed by a flash of light.

Meanwhile, a punk in Los Angeles named Otto (played by Emilio Estevez) is fired from a supermarket, and his girlfriend breaks up with him. He is offered cash to drive a car away from a neighborhood by a man named Bud (played by Harry Dean Stanton).

Otto learns that Bud is a repo man, and declines his offer to work for him. He goes home to find out his parents have just given away most of their money to a televangelist. He takes the job working for Bud, and starts repossessing cars. He gives a girl named Leila (played by Olivia Barash) a ride and she tells him about aliens in a trunk of a Malibu who are emitting dangerous radiation. Bud’s repo company was just informed about this car and offered $2000 to repo it.

Meanwhile, the man driving the initial car, Parnell, gets to LA but is tracked by police. A rival repo company take the Malibu, but since the car is so hot they stop for sodas. The car is immediately stolen by some of Otto’s punk friends.

While visiting a club that night, the punks are visited by Parnell who tricks them into opening the trunk. One punk is killed and the other two flee. Parnell picks up Otto and drives around before dying from radiation. Otto takes the Malibu back to his repo company’s lot.

Eventually, the car becomes highly radioactive even as different groups are trying to capture it: the government, UFO scientists, and even the televangelist. However, everyone who approaches the car explodes into flames except for a weird mechanic who works at the repo company. He and Otto enter the car and fly off into space. 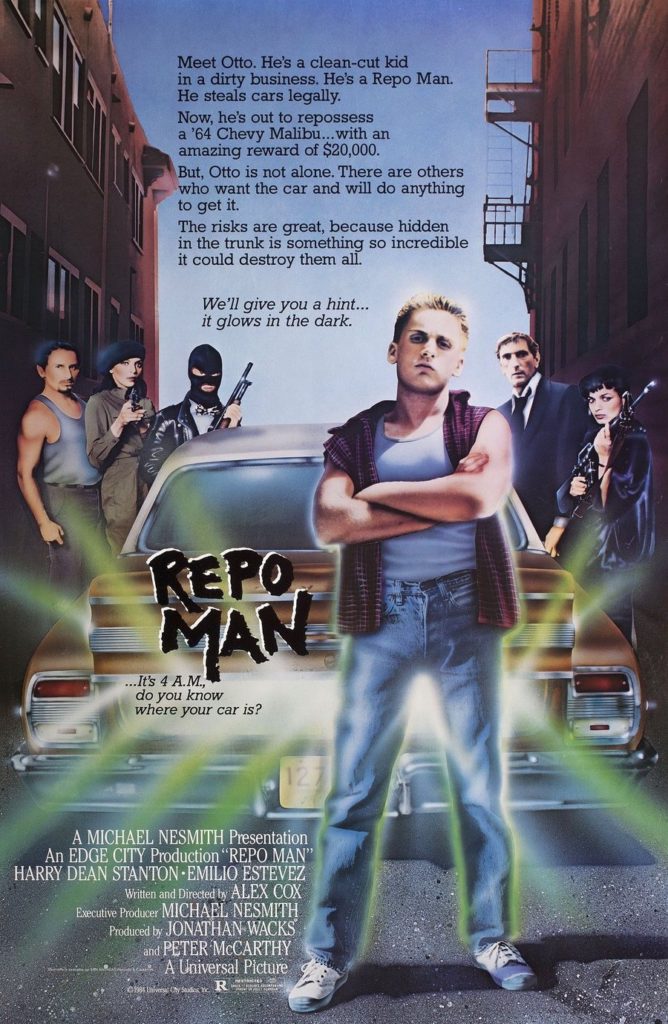