The 1996 film Beastmaster III: The Eye of Braxus is a sword-and-sorcery film produced as the third sequel to 1982’s The Beastmaster, and following Beastmaster II: Through The Portal Of Time.

The film went direct to video. It’s worth noting that Marc Singer looks cross-eyed in the poster.

Dar, the Beastmaster, is played once again by Marc Singer. He joins a man named Seth (played by Tony Todd) in order to save his young brother, a king named Cal (played by Casper Van Dien).

Once embarking on their journey, they find that the young boy has been captured by Lord Agon, an evil ruler who sacrifices youth in order to stay young, and in order to gain ultimate immortality Lord Agon plans on releasing an evil demon named Braxus from imprisonment.

Dar and Seth fight along the way multiple enemies and monsters, and are joined by Morgana, a young witch (played by Lesley-Anne Down) and other characters like Bey, an acrobat, and an amazon warrior, Shada (played by Sandra Hess). 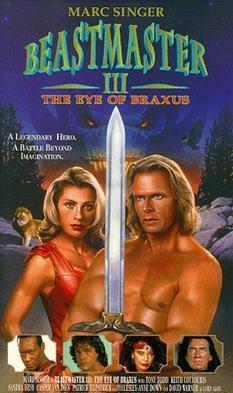